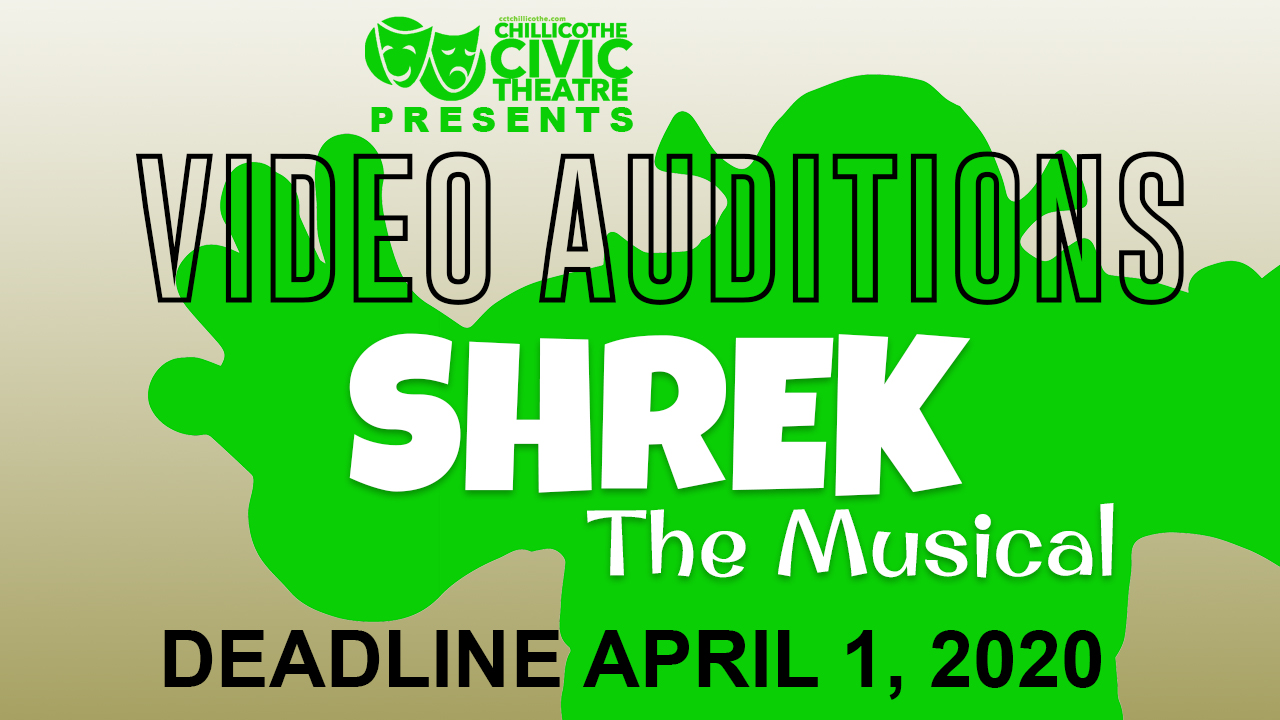 AUDITIONS FOR SHREK, THE MUSICAL
DIRECTED BY TAHREA MAYNARD

VIDEO AUDITIONS for Shrek, the Musical!
Directed by Tahrea Maynard

Requirements for the video audition:

-Intro - Name, Age, Parts of interest
-Speak loud and clear for the video
-Submit both songs and sides
-No group auditions (You may use additional people to help with reading for interaction)
-If you are a dancer, please feel free to add a dance audition to your video

Please note: The script only calls for a few children. A chorus of young kids will not be cast in the show. Teens 16+ will be considered.

CALL BACKS are to be determined.

The following schedule will be dictated by Governor DeWine’s mandates to the State of Ohio for COVID-19 and is subject to change and will be evaluated on a daily basis.

A MESSAGE FROM THE DIRECTOR:

I first want to thank you all for your interest in this show. COVID-19 has impacted all of us in different ways, creative folks especially. Even though we must adhere to the Governor’s word, we can still share in the fun of auditioning.
I want to see your energy and excitement. I want to see the character to the fullest extent. Have fun. Stay on point and, please- take it seriously- and have FUN. I am very excited to see what y’all can do!!
(My birthday is March 30th, so your submissions will give me a fun and interesting week as we dive into each video.)

Plot Summary:
Based on the Oscar®-winning DreamWorks film that started it all, SHREK: THE MUSICAL brings the
hilarious story of everyone's favorite ogre to dazzling new life on the stage. In a faraway kingdom turned
upside down, things get ugly when an unseemly ogre -- not a handsome prince -- shows up to rescue a
feisty princess. Throw in a donkey who won't shut up, a bad guy with a SHORT temper, a cookie with an
attitude, and over a dozen other fairy tale misfits, and you've got the kind of mess that calls for a real
hero. Luckily, there's one on hand -- a big, green, lovable one named Shrek! Let your freak-flag fly with
this wonderfully zany musical for the whole family. Full of all-new songs, great dancing and breathtaking
scenery, SHREK: THE MUSICAL is part romance, part twisted fairy tale and all irreverent fun!

SHREK (Male, Adult – High Baritone / Tenor) - Our story's title character. A big, green, terrifying ogre who
lives alone in a swamp. He embarks on a journey to rid his land of fairytale creatures and, along the way,
falls in love with Fiona. Begins as a grumpy hermit, but reveals his layers and eventually becomes the
hero. Excellent singer and actor.

PRINCESS FIONA (Female, Adult – Soprano / High Belter) - The beautiful princess of Far-Far-Away, she
transforms into an ogre every night when the sun sets. Rescued by Shrek and eventually falls in love with
him. Quirky, blunt, and multitalented, she is not an ordinary princess. Excellent singer and actor with great
comic timing.

DONKEY (Male or Female, Adult – High Baritone / Tenor or Alto with High Belt) - A talking donkey who
joins Shrek on the run from Farquaad's guards. Quite the chatterbox, he is not deterred by Shrek's looks
and practically forces himself into his good graces. Easily frightened and pushy, but also an optimist with
heart. Excellent singer and comic actor with a huge personality.

LORD FARQUAAD (Male, Adult – High Baritone) - The comically short, ruthless ruler of Duloc. He is in
search of a princess to marry so that he can become king. Has an intensely unfair bias against fairytale
creatures that stems from a resentment of his father. Self-absorbed, lonely, and cruel. Excellent singer
and comic actor. Actor must be able to play this role on his knees for the whole show.

DRAGON / SUGAR PLUM FAIRY (Female, Adult – Alto with Big Belt) - A dragon that has been charged
with guarding Princess Fiona in her isolated castle. She eventually falls in love with Donkey and attempts
to keep him there forever. Imposing and flirtatious, but tired of her job as the glorified baby-sitter. She
sings “Forever” with her Knight back-up singers. May double as the Sugar Plum Fairy, who has featured
lines and solos in “Story of My Life” and “Freak Flag,” as well as Gingy.

GINGY (Male or Female, Any Age – Any Vocal Part) - A gingerbread man initially kidnapped by Lord
Farquaad. His wit and resolution help him both avoid trouble and inspire the rest of the fairytale creatures.
This character is portrayed with a puppet, which may be voiced and operated by actor appearing as
Sugar Plum Fairy.

PINOCCHIO (Male or Female, Teen or Adult – Tenor with falsetto or Soprano / Alto) - The leader of the
fairytale creatures. Although portrayed by a live actor, Pinocchio is an animated puppet whose nose
grows every time he lies. Plenty of sass with a penchant for lying, he leads the troupe of Fairytale
Creatures in the musical numbers “Story of My Life” and “Freak Flag.” May double.

YOUNG FIONA (Female, Age 8-12 – Soprano with Strong Belt) - Princess Fiona as a little girl. Sings a
solo in “I Know It’s Today” with Teen Fiona and Fiona. May double.

TEEN FIONA / FAIRY GODMOTHER (Female, Teen – Soprano with Strong Belt) - Princess Fiona as a
teenager. Sings a solo in “I Know It’s Today” with Young Fiona and Fiona. May double as Fairy
Godmother, who has featured lines and solos in “Freak Flag,” “Story of My Life” and “This is Our Story”.

3 LITTLE PIGS (Males, Teens or Adults – Tenors or Baritones with ability to sing tight harmony and
German Accent) - Fairytale creatures with solo / trio work in “Story of My Life,” “Freak Flag” and “This is
Our Story.” May double.